As birth rates decline and the labor market tightens, the “richest pool of potential” in the economy are people who have been touched by the justice system, according to Jeff Korzenik, chief economist at Fifth Third Bank.

Korzenik is a national advocate for second chance employment and author of “Untapped Talent: How Second Chance Hiring Works for Your Business and the Community.” He was the keynote speaker for “Greater Charlotte Pathways Home: An Executive Convening on Second Chance Employment,” a virtual summit hosted Feb. 25 by the Center for Community Transitions.

While there’s a compelling community case for justice-involved people to be able to become productive and engaged members of society, it’s also in the interest of the business community – collectively and individually – to invest in this viable talent pool, Korzenik said.

Over time, the country’s growth rate has been slowing and projected growth is less than 2 percent. Birthrates have been declining since 1990 and workforce growth has been declining – an issue exacerbated by the pandemic. Many people lost their jobs early in the pandemic and have not been able to get back into the workforce. This long-term unemployment tends to force people out of the workforce for good. 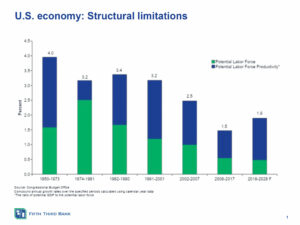 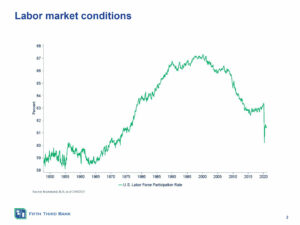 “If our economic growth is dependent on our ability to grow our workforce, we’re in trouble,” he said. “But the solution lies in digging deeper into our population and finding people who have been marginalized for the workforce and bringing them back in. We have burdened people (with a felony conviction) and unfairly excluded them from consideration in the workforce for what are often very, very minor crimes.”

More people working means more consumers in the economy and faster growth, which benefits the collective business community. But, Korzenik said, “If you can’t find the workers you need, you can’t service your customers, you can’t grow your business, and perhaps you can’t even maintain your business. This is an imperative, an economic imperative for businesses.”

Developing a successful model to ensure the justice-involved population is employed to its productive potential requires a partnership of pioneering business leaders and people who’ve been marginalized from the labor force, not just people with criminal convictions.

“The critical role is being played by employers who have to be open to new ways of approaching candidates and new ways of supporting those candidates, (but) are often making up for shortfalls,” he said. “Not because people with criminal records have inherent flaws, but because they often come from backgrounds of extreme poverty and have challenges with housing, transportation, lack of mentorship.”

Employers who make accommodations to meet the needs of employees with criminal backgrounds have a very good return on their investment – highly engaged and loyal employees. Governmental policy changes and reforms, coupled with nonprofit partnerships, help lower investment costs by identifying people who are ready to return to work, helping them rebuild their lives, and giving them the resources they need to succeed.

“That combination of engagement and loyalty – meaning low turnover – is a recipe for productivity and profitability. This has been consistent across every major study done,” Korzenik said. 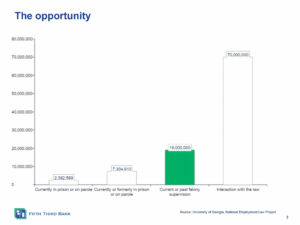 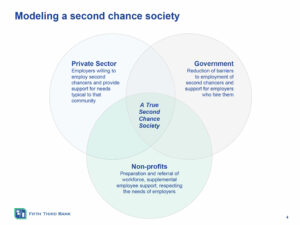 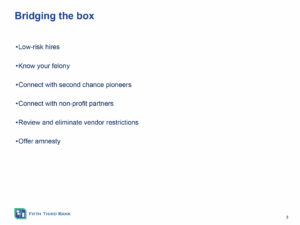 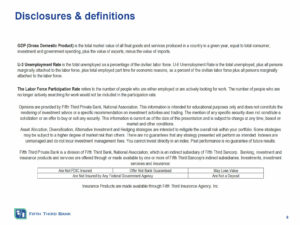