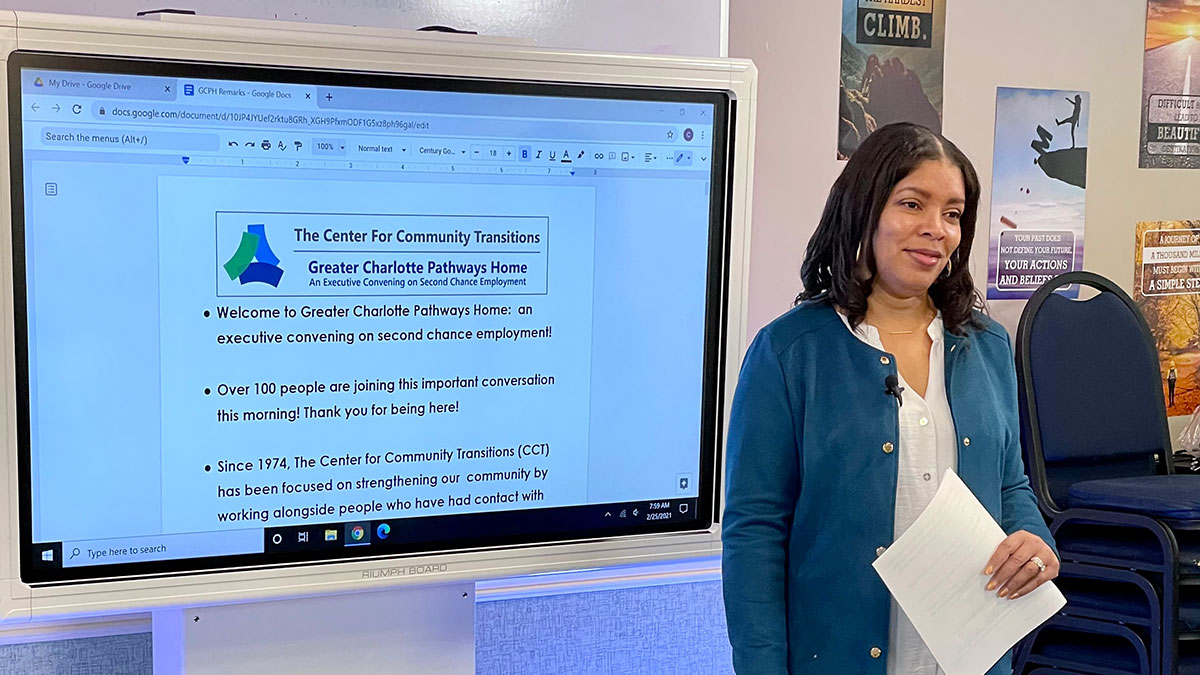 If Charlotte wants to become a city without economic and social inequalities, the whole community – both public and private sectors – must disrupt the cycle of incarceration by reevaluating hiring practices and supporting second chance employment.

That was the consensus among the 100-plus employers, workforce development professionals, hiring managers, local and state leaders, and business community members who gathered virtually on Feb. 25 for “Greater Charlotte Pathways Home: An Executive Convening on Second Chance Employment.”

Hosted by the Center for Community Transitions and sponsored by Bank of America, the online summit highlighted the collective effort that’s required to pave the way for a healthier economic future for formerly incarcerated individuals.

“Disrupting the cycle of incarceration is a conversation that we could admittedly say has not been happening in our economic mobility conversations in our city. But the time is now, the resources are here and the people are here – they’ve always been here,” said Executive Director Patrice Funderburg. 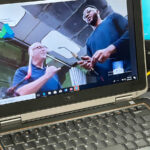 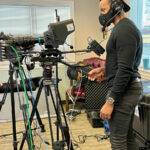 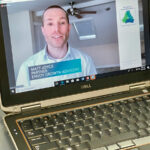 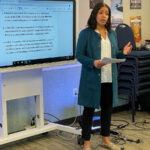 Event speakers discussed key legislation, economic and workforce trends and actionable next steps businesses can take to invest in and get formerly incarcerated people back to work. Here are some of the highlights:

“The goal of reducing recidivism by opening up opportunities and providing hope to people with criminal records is supported by left and right advocacy groups, Democrats and Republicans, and most importantly, many of you in the business community. The numbers call out for a change in the narrative from tough on crime to being smart on crime … There is a growing sentiment that a revolving door criminal justice system wastes a lot of money, and does not make our community safer.

I have heard from numerous employers over the years that workers with a criminal record who are given a chance are some of the most loyal and motivated employees they have. The best way to reduce recidivism is to give people hope and an opportunity for a better life. That can be done by reducing unnecessary barriers to success and by providing the tools and investing in the people so that they can succeed.”

“None of us are wholly defined by our worst day. That’s why it is so important that we afford people meaningful second chances. We want every person to achieve their fullest potential because of the joy and sense of fulfillment and pride that brings them as individuals. But we also have a collective self-interest in people’s success, a broader interest on the part of the community. Because when people are working and gainfully employed and contributing back to the community, they’re also paying taxes.

And importantly, we can reduce the likelihood of repeat crime, making our communities safer. Practically everybody who is in jail will get out. The question is, what happens when they do? Because, if they come out and find that door after door after door after door is closed to them, it makes it substantially more likely that they will just pursue the path that led to their involvement with the criminal justice system in the first place, and that is in none of our interests.”

“I see economic opportunity as key … (it) really does address the root causes of racial inequities in the criminal justice system. What do we know about those 2 million people in North Carolina who have criminal records? That legally, there are more than 1,000 collateral consequences in our state law and over 1,200 in federal law. Collateral consequences are all the ways in which the law says you don’t have access to something or something’s going to be different for you because you have a criminal record.

The task force has made a lot of recommendations to try to address some of those collateral consequences. Things like changing the process so that if someone has multiple convictions across several counties, they can apply for a certificate of relief in just one county. We are (also) recommending that North Carolina follow 22 other states and opt-out of the ban for eligibility for SNAP benefits that accompanies convictions for certain drug offenses.”

“Every year, we release over 20,000 individuals back into the community from our state prisons. The reentry process is a very daunting process for a lot of people coming back into the community, and this population also has a high recidivism rate. But research has shown the number one thing we can do to help reduce recidivism is help them to obtain and maintain employment.”

“We’ve also collaborated closely with the Department of Public Safety, to help minimize barriers of community supervision in finding and keeping a job. (There are) two key learnings for us in this work. Number one, the obvious one, is that companies implementing fair chance practices are accessing a strong and often overlooked talent pool. And number two, that perceived risks that are keeping companies from adopting fair chance practices, whether those be legal, HR, public relations, or otherwise, should be closely scrutinized and likely reevaluated.”

“Employment can lead to upward mobility, but not everyone gets a chance to work and for the justice-involved, their barriers and reentering society are many. First, they have a record. Their educational opportunities may have been limited. They may have employment histories that have gaps, and those with criminal convictions have fewer job prospects and limited access to housing and public assistance.

According to our partners at the U.S. Chamber of Commerce, having a prior conviction reduces employer callback rates by 65 percent for black male job applicants, compared to a 50-percent reduction for white male applicants. Expunging low-level offenses isn’t easy, nor is it cheap. We’re advocating for simplifying the process to seal or expunge certain nonviolent and low-level arrests and convictions by making it automatic one year after a person has fulfilled their legal obligations without rearrest or conviction. With the passage of clean slate policies, we’re able to grow our talent pool and collectively benefit from the economic activity of a productive workforce.

“No matter the economic conditions, whether we are experiencing low or high unemployment, one issue remains constant for those that are justice-involved, and that’s a lack of accessibility to job opportunities. Employment is a critical component to anyone’s livelihood and ability to take care of themselves and their family, but it also instills a sense of pride and dignity and allows someone to be a contributor to their family, organization, and their community, something that is much needed for an individual that is navigating the additional challenges that come with having a criminal background.”

“According to a United Nations Racial Disparity report, the justice system disproportionately impacts black males. Once an individual is involved in the justice system, lifelong repercussions can continue, particularly barriers to employment that prevent them from being free of their past. Prison walls rarely disappear unless employers are willing to provide access to meaningful jobs and opportunities. If a justice-involved individual is lucky enough to earn employment, it’s usually limited to jobs in support, food services, or specialty trades with under-representation in health care.

So bottom line, justice-involved individuals need to be able to get a job and earn a living wage to support themselves and their families just as we do. As such, Atrium plans to disrupt this cycle of disenfranchisement of justice-involved males through a partnership with City Start Labs’ ReEntry Entrepreneurship Program. Atrium will hire, educate, and train and place up to 20 justice-involved individuals into in-demand roles. To ensure we create opportunity but continue to protect our patients, we will welcome people whose past offenses are nonviolent and who have demonstrated they have learned from past mistakes and are not likely to repeat them.”

“As the community’s largest human services agency, we know that everyone is valuable. No one should be defined or labeled by their criminal background or circumstances. Mecklenburg County is committed to providing a path for justice-involved individuals to turn their lives around. Our workforce development initiative has a holistic approach that eliminates barriers to employment.

I also want to encourage employers to take advantage of the IRS Work Opportunity Tax Credit program, which provides $2,400 in tax credits for hiring qualified populations, including justice-involved individuals with a felony conviction for 240 hours or six months of full-time employment. There’s also the Department of Labor’s Federal Bonding Program, which issues fidelity bonds to employers who hire individuals whose backgrounds can pose significant barriers to securing or retaining employment. The bonds cover the first six months of employment at no cost to the job applicant or the employer.”