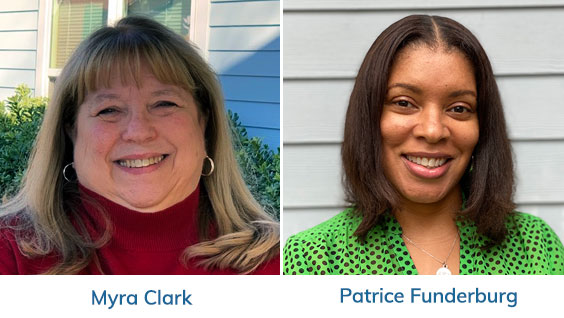 Clark, who first joined CCT in 1988 as program director for the Center for Women, will serve as a part-time consultant until June to help with the transition.

“Since 1974, CCT has been strengthening our community by providing support and opportunities for people and families impacted by incarceration. This leadership change is another milestone in our proud history,” said John Tate, board president.

He added, “Myra has been the heart and history of CCT and has exemplified great integrity, compassion and selflessness. For 32 years, she’s devoted herself to our organization and has helped thousands of individuals and families rebuild their lives and reintegrate into society as productive citizens.”

In addition to her vision and work with CCT, Clark has been an activist who’s connected with people in political, legal, religious and employment arenas to change perceptions about community members with criminal records.

Clark is a former Liberty Bell winner from the Mecklenburg County Bar for her community service in “strengthening the American system of freedom under the law.” She’s also served on Gov. Perdue’s StreetSafe Task Force and was honored last year as a Leading on Opportunity Champion.

“I do this work because I believe no human being is disposable and second chances are possible. The new decade signifies a brand new chapter for CCT and I’m excited to pass the reins to Patrice and start enjoying my retirement,” Clark said.

She added, “For the past 4 years, Patrice has played a key role in the critical work we do for our community. She’s demonstrated how thoughtful and skilled she is in many areas and I’m confident in the path she’ll lead for this organization.”

After working in corporate human resources for over 20 years, Funderburg has used her background and experience for social justice, specifically working as an advocate and activist with people directly impacted by incarceration and correctional control.

For the past 3 years, Funderburg has taught classes and mentored women and girls at Mecklenburg County Detention Center with local nonprofits that serve returning citizens. She also serves on Gov. Cooper’s State Reentry Council Collaborative and is an advocate member of the National Council of Incarcerated and Formerly Incarcerated Women and Girls.

“Building people not prisons isn’t just a statement at CCT, it’s how we model community,” Funderburg said. “The people and families we serve are our greatest assets. When people feel seen, heard and valued, they’re able to navigate their own transformation. We provide the tools and support they need to be successful.”

She added, “I look forward to leading CCT in its vision of lowering recidivism, improving access and opportunities to sustainable employment, and disrupting the generational cycle of poverty to prison.”

About the Center for Community Transitions

There are an estimated 2 million people in North Carolina with a criminal record. CCT’s work provides employment and transition services; supports alternatives to incarceration; and restores and strengthens family bonds. Everyday people receive reentry and family services from CCT to rebuild their lives and families while dealing with job and financial difficulties that result from incarceration. In 2018, CCT helped 1,309 men, women and children impacted by incarceration through its LifeWorks!, Families Doing Time and Center for Women programs.

Posted in News / In the Media, Newsletters